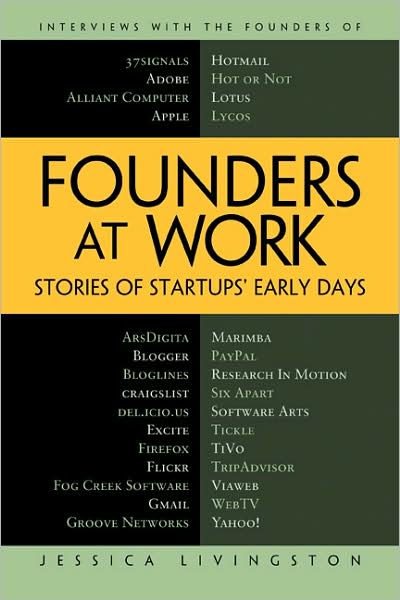 Founders at Work is a book of interviews with startup founders. I finished reading it a few days ago, and I want to collect a few thoughts about it here.

What is the deal with startups? They are a path to financial independence, one of the few remaining forms of freedom in the first world. In the words of Paul Graham, "Instead of working at an ordinary rate for 40 years, you work like hell for four." And then, if you're (very) lucky, you can do whatever the hell you want for the rest of your life, and never worry about paying rent again.

I grew up thinking that starting companies was unfathomably hard, and only some special breed of people could pull it off. There was a brief period in middle school when a certain cheesy book got me excited that maybe working for my entire life wasn't the only option out there. But there wasn't much I could do as a middle-school student, so that thought lay dormant for a long time.

I wasn't forced to think about my future too much until my last year in college, when I was faced with two equally unattractive options. I could go work as a software engineer, which meant I would be little more than a code monkey. Or I could go to grad school, where I would be a poorly paid researcher / slave. I eventually chose the latter, partly because of external influence, and partly because I thought I would get to work on more interesting problems that way. (I still think that going to grad school is worth it, even if one does not intend to become a professor. More on that in a future post.)

Luckily, it was also around that time that I came across this article about Y Combinator. (Thanks V, you know who you are.) While it would be a stretch to say that it made startups look easy, the article made it seem plausible that regular people could start a startup (as opposed to child prodigies, or people who append an MBA to their name). Ever since then, I have become increasingly certain that I want to work on a startup in the not-too-distant future. Founders at Work offers a tiny glimpse at what lies ahead.

Starting a startup is hard -- this was probably the most consistent theme brought up by the people who were interviewed. Founders often isolate themselves from friends, family, and relationships during the early years of a startup. They work non-stop fueled by caffeine, four hours of sleep per night, the promise of wealth, and the even more potent fear of failure. Many asid that they wouldn't have started their company if they knew how hard it was going to be.

Many founders identified perseverance and determination as being the key traits that got them through the early years. This is not so surprising in light of the preceding paragraph. More surprisingly, the original business idea doesn't seem to matter very much. Often the business plan will change substantially as the young company learns what works and what doesn't. This has led various people to proclaim that the team or the market is the main factor determining if a startup will succeed, rather than the original idea. If the founders are determined to succeed, they will eventually land on an idea that works, but often after spending many months working on less successful ideas. Interviewees stressed over and over again that communicating with their users was crucial. If you aren't building something that the users want, you are doomed to having no users to speak of.

While some lucky companies survived and grew with little outside investment, most companies took outside funding from Venture Capitalists (VCs). The interviewees' experience with VCs varied wildly -- from decent VCs who mentored them and their business, to hawk VCs who exploited them and tried to seize control of the business. What struck me most about the funding landscape was how mafia-like the Sillicon Valley really is. The big guns are few, and they all know each other. You get deals through connections, not so much by merit. Your network and your reputation matter a lot.

Another curious fact is that hiring good software entineers in the Sillicon Valley is hard. In the words of Joe Kraus, "great people don't look for jobs, great people are sold on jobs." The demand for good engineers exceeds the supply, and competing for those good engineers means that you are competing against the deep pockets of Google and Apple. As the business grows, it will also need some non-engineers sooner or later. These are sales people, "business development" people, and the like. Engineers often don't know how to evaluate and hire good non-engineers.

Most of the startups in the book have had serious problems with scaling at one point or another. As disconcerting as this may sound, it is almost a necessity when your user base grows by orders of magnitude. Design decisions made with 1,000 users in mind will almost always have to be revisited by the time you reach 1,000,000 users. (On a related note, Mark Fletcher says that internet companies are valued more for their user base then for their technology. On pretending to be bigger than you actually are, James Currier had this to say: "Well, of course you sometimes have to exaggerate. [...] You've got to say you are a step ahead of where you actually are to move to the step that you want to be at.")

The one thing I felt was missing from the book was a discussion of the various controversies in which the startups were involved. For example, there was no mention of TiVo's privacy issues, nor any discussion of the cofounders' opinions on the topic, or the compromises they had to make between user privacy and advertising revenue. Same thing about tivoization and the GPL. It is easy to think of a techie cofounder as "good" and of a big corporation as "bad", but since the latter is often the brainchild of the former, resolving this disconnect requires more nuanced thinking.