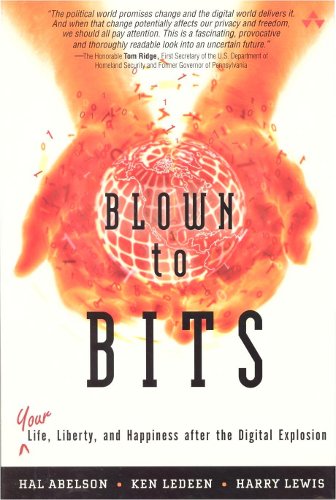 For better or worse, the Internet is here, and the world must learn to deal with it. Why is this difficult? Because the Internet is unlike anything we've seen before, and it is challenging the assumptions in our heads and in our laws. Let's count the ways in which a digital object -- a song in mp3 -- is different from a physical object -- the same song on a vinyl record:

The examples above are a bit contrived, but you should be able to make the right extrapolations. Just replace "song" with "secret document" or "personal data". The digital world is forcing us to reconsider concept such as copyright, free speech, property, and privacy. Blown to Bits discusses these and other issues in context, explaining where we are and how we got here. I want to dwell on a few things that I found particularly intriguing.

The book claims that we don't really know what we want when we say we want privacy. I think Google Street View is a good illustration of this. Before Street View, if I wanted to look at your house, I had to drive down your street. Now I can just look at your house online without having to drive there. Street View did NOT take something private and make it public -- it only took something already public and made it VERY public. The same thing is happening to public records, such as voting lists. Now anyone can play private detective. With so much information available so easily, you can do some pretty unexpected things, such as de-anonymizing an anonymous dataset. Yet having the dataset publicly available is clearly good for research. So we want the data to be public, and we don't want it to be public. Paradox!

Cryptography is another topic that the Blown to Bits touches upon. To the best of our mathematical understanding, cryptography gives us the tools to exchange encrypted messages that not even a powerful government can decode. Understandably, the US government is uncomfortable with that, and so, for a while, they tried to maintain strict control over cryptography. However, those efforts failed for the most part, and today strong crypto is free to use legally in the US. How did we wrestle this important freedom from the hands of the all-powerful government? According to Blown to Bits, it had everything to do with SSL / TLS, which is the technology your browser uses to securely communicate with e-commerce sites, among others. The world's confidence in secure e-commerce was deemed too important to compromise, and thanks to that, we now have free legal crypto. Very surprising.

Cryptography is also used to provide Digital Rights Management (DRM), a technology designed to prevent piracy. DRM has been largely unsuccessful at achieving that goal. Instead, it forced users to deal with annoying restrictions, such as not being able to transfer their legally purchased content from one device to another. I was pleasantly surprised to read in Blown to Bits that there has been a recent deescalation in the debate over DRM. It all started with an open letter from Steve Jobs to the "big four" music companies, explaining why DRM didn't work and how it hurt the consumer. Now both Apple's iTunes Store and Amazon MP3 sell DRM-free music. (They still protect against piracy through watermarking.) I hope that the deescalation of DRM continues to other forms of content, such as e-books.

Every time I read something on Slashdot, I get depressed about the never-ending encroachments on online freedoms. But, as Blown to Bits shows, not everything is hopelessly broken. The DRM story above is one hopeful example. Another epic win came when the Supreme Court struck down a law attempting to ban "indecent communication" on the Internet. Here is a quote from Justice Dalzell's opinion:

[The] Internet may fairly be regarded as a never-ending worldwide conversation. The Government may not [...] interrupt that conversation. As the most participatory form of mass speech yet developed, the Internet deserves the highest protection from governmental intrusion.

Despite these sudden outbreaks of common sense, we still have a very long way to go. You don't have to look hard to find acronyms that will put a scowl on the face of any Internet freedom fighter. The DMCA that refuses to die, the SOPA / PIPA which (luckily) did die, the TPP that is negotiated in secret... The problem is that laws change too slowly compared to the world of technology, and restrictive laws can chill innovation for years. It does not help that there are powerful interests with very deep pockets out there, who will do everything in their power to maintain control over entire industries.

The digital explosion asks us difficult questions. What should be private and what should be public? What does it mean to have an online identity? How much censorship and surveillance are we willing to tolerate? Do we own our devices and the content on them, or do they belong to the manufacturer / carrier / content producer? Our old metaphors -- ones based on the scarcity of the physical world -- do not work anymore. Will technology be used for freedom, democracy, and innovation, or for control and surveillance? The decision is up to us, and we should join the conversation before it is too late.

PS. If you think the issues discussed in this article are important, consider supporting the organizations that fight for our digital freedoms. Among such organizations are Creative Commons and the Electronic Frontier Foundation.

PPS. Blown to Bits is released under a Creative Commons license. This means that you can download it -- legally! -- for free.