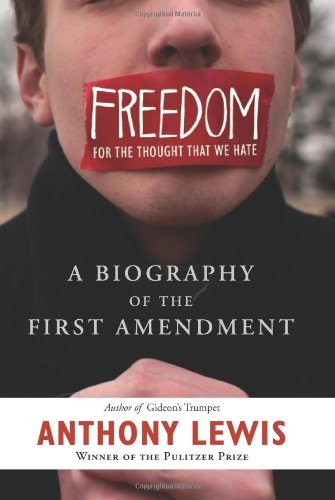 I expected this to be a boring book of legalese, but it turned out to be both readable and interesting. The first amendment is short and sweet, but not everyone agrees on how to interpret it.

Congress shall make no law respecting an establishment of religion, or prohibiting the free exercise thereof; or abridging the freedom of speech, or of the press; or the right of the people peaceably to assemble, and to petition the Government for a redress of grievances.

Anthony Lewis traces the history of how this text was interpreted, from its adoption in 1791 until today. I took free speech for granted in any established democracy, but in fact the US enjoys far stronger protections for free speech than most other countries. For example, in the US it is okay to insult the president, or to burn the national flag. You could go to jail for doing this in other countries. Even some forms of hate speech, such as displaying the Nazi swastika, are protected by the first amendment in the US, while being explicitly banned in parts of Europe.

There are also cases where protection for free speech has perhaps gone too far. For example, donations to political campaigns are deemed protected speech, and thus no limits can be imposed on them. This means that wealthy institutions can spend as much money as they want trying to get favorable politicians into office. Another example is that the press can publish private information about anyone, no matter how intimate or cruel. This puts freedom of the press at odds with personal privacy, and it is not obvious how to balance the two. (Interesting point by Justice Breyer: More privacy would actually encourage free speech, because you are more likely to speak freely if you have no fear that your private conversations will be made public.)

At the other extreme are the instances where the freedom of speech has suffered embarrassing losses. Would you believe that people were once prosecuted for publishing "obscene poetry"? In a more disconcerting pattern, free speech and other civil liberties consistently take a beating every time the US is at war. During such times, politicians manipulate fear to reach for more power, and often encounter little opposition from the public. When the war is over, the injustices and excesses of power are slowly undone. Lewis points out two disturbing ways in which the current "war on terror" is different in this respect. First, because the enemy is so vaguely defined, there is no way to tell when the war will be over. (This reminds me of the endless war in George Orwell's 1984, and the motivations behind it.) Second, the press, which is often the first to cry foul about the government's misdoings, has been unusually quiet this time around.

I liked this book because it gave me a lot of context for why things are the way they are in the US. Despite my general cynicism with regards to the US government, this book gave me a lot of respect for the Supreme Court. Being appointed for life rather than elected, the judges are much more likely to consider the long-term consequences of their decisions, instead of catering to the special-interest groups that pay for most politicians' seats. I was impressed by the depth and acuity of the opinions quoted in the book. I was also glad to learn that the Supreme Court has the maturity to change its mind on an issue every once in a while.

The book treats freedom of speech from the point of view of the constitution, and federal and state laws. Though that would be a large project in itself, I wish that the book had also discussed breaches to free speech in the private sector. For example, Apple, Walmart, and even my own university have been willing, at one point or another, to abridge the freedom of speech in the name of public peace. Some suggest that this will result in a Fahrenheit 451-like society, where speech is repeatedly constrained and reduced to the point of becoming meaningless. With free speech gone, free thought is gone. To make sure that this doesn't happen, we need to cultivate our courage to hear things that make us uncomfortable. E. B. Hall summarized Voltaire's beliefs about free speech in these words: "I disapprove of what you say, but I will defend to the death your right to say it."

PS. If you feel strongly about free speech, consider donating to an organization that promotes and defends this right. Two such organizations are the American Civil Liberties Union and the Electronic Frontier Foundation.