She had a voice two octaves deeper than her stature would suggest. Hearing her laugh was like getting shots of dopamine straight into my brain. For the remainder of the ride to school, we talked. We were both strangers to this continent, although she had enjoyed a sizeable head start. Neither of us felt at home here, but there was no point in going back. She told me about the strange lucidity that overtook her on a long-haul flight. I blamed it on sleep deprivation and increased oxygen to the frontal cortex. She preferred to attribute it to something more mysterious.

Her eyes were disarming. Like you're nine years old and playing with your kitten, and you realize you can't even clench your fists. I had to blink if I wanted to breathe. I had to look away if I wanted to hear what she was saying. Perhaps my heart was young then, but never since have I gazed into a pair of eyes that exposed and unsettled me so. Thin made-up shadows were on her eyelids that day, and I asked if she always wore them. She said yes, that makeup was like a way to hide, and that I wouldn't really understand unless I wore it myself. At the time, I couldn't imagine what insecurities someone like her would possibly have to hide.

The shuttle bus reached campus, and we went on our separate trajectories. For the rest of the day, I felt like I was walking on clouds. I was distracted in class. I took the stairs two at a time. I stopped and smelled the magnolia flowers. My mind came to the bittersweet realization that, though I would never have her, she was the most beautiful girl I had ever seen.

I caught glimpses of her every now and then in the months that followed. Here she was in a cerulean dress that sucked the color out of everyone around her. There she was taking off a heavy winter coat, revealing the expensive-looking red velvet on the inside. If I was close enough, I said hello. Sometimes she responded, and that was enough to make a good day. Other times she didn't hear me, and that hurt. I resented her for having such power over me, and I hated my own fickle sense of self worth.

We were profoundly incompatible. My tools were pen and pencil, and my canvas was a sheet of paper. Her tools were shawls and bracelets, and the canvas was her own body. I curled up with a book on Friday nights, while she went out dancing. I was still tongue-tied around girls; she could have anyone she wanted. I imagined myself in the shoes of the guys she hung out with. I knew she was wrong for me, but I still melted at the sight of her.

The following semester she didn't return to school. Through a common acquaintance, I found out that she had taken a year off to do research in Afghanistan. Apparently, she loved the broken places of the world. I added this to my list of unsolved mysteries about her. Picking up the campus newspaper each day, I made a habit of scanning for her byline. I read everything I could find. I learned that more troops were needed in Afghanistan, not because the Americans were losing the war, but because they had taken it upon themselves to rebuild the country's infrastructure. I learned that the sky there was brown, and that the dust of the desert permeated everything.

At some point I graduated, and then I was too busy to keep track of her. Once or twice I saw her features imperfectly rearranged on someone else's face, but by then I wasn't sure how much my memory of her had been touched up. I remember going to an exhibit of anonymous postcards. One in particular depicted the silhouette of a soldier against a fiery sunset. Under his feet, in small white letters, the caption said, "I fell in love in a war zone." And for the longest time, I couldn't shake the feeling that I knew who the author was.

Why would a girl with seductive eyes and a perfect smile give up a world that cherished her femininity, and embrace instead a culture that had it all backwards? I guess her mysteries were never mine to solve. I had escaped from a place of poverty and corruption into a country with too much power and not enough guilt. She had escaped from a place of rampant consumerism and mandatory makeup into a country where she had to wear a burqa. Who am I to say that I made the better choice? In the end, we were both just trying to escape from ourselves. 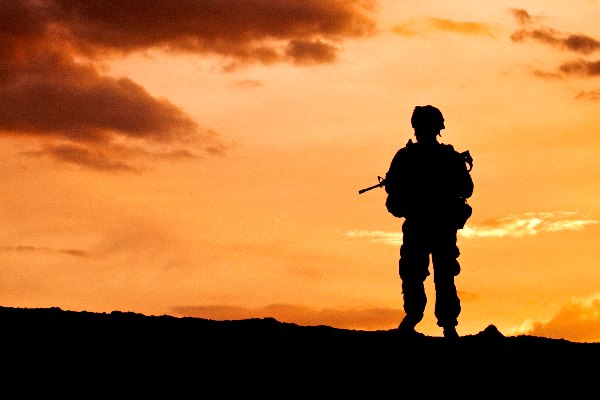