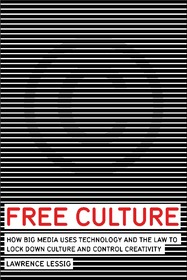 Have you ever seen one of those movies where some kid knows a disaster is coming, but no one believes him until it's too late? I got the same helpless feeling from reading Lawrence Lessig's book Free Culture, except that this time the stakes are real. Intuitively, intellectual property is just like physical property, and should be given the same levels of protection. It's easy to accept this proposition without examining it any further, but Lessig argues that it is in fact wrong. Thanks to extreme measures taken to protect intellectual property, we are in danger of becoming a society where only the rich and powerful are allowed to create.

We are already dangerously close. Let's say you're making a documentary film, and want to include a short clip from some other film. (This does not hurt the original creators in any way -- they continue to make money from selling their film.) Your first option is to ask the original creators for permission. They will charge you thousands of dollars for this, and you will have to check with a lawyer to make sure you're not inviting a lawsuit. Your second option is to use the clip without permission, under the fair-use clause. This makes it likely that you will get sued, and even if you manage to defend your case, you're going to spend tens of thousands of dollars on lawyers. Either way, including that short clip in your documentary involves lawyers and big money, so it's out of reach for most independent filmmakers. The sad truth is that today, some forms of creativity come with a hefty price tag.

Lessig contrasts the permissions-and-lawyers culture of the preceding paragraph with the free culture that has been traditional in Western society. When he says "free culture", he does not mean a culture where there is no property, or where creators don't get paid. He means simply a culture where you can borrow ideas freely and build upon them.

Patents and copyrights are the two main mechanisms for protecting intellectual property. They aim to strike a balance between rewarding the original creator and letting society at large benefit from his or her creation. For example, a writer might own the copyright on her book for 14 years, during which she controls the price and gets the profits. (I'm simplifying here.) After 14 years, the book passes into the public domain, and everyone is free to make copies and reuse her work. So the writer gets a monopoly for 14 years, after which everyone is free to use her work for any purpose. At least, this is how things worked in England in the late 1700s.

Today things are more complicated. The copyright term in the US is 90 years. Copyright covers not only copies of books, but all media, including derivative works. Digital technology means that any use of a work, such as viewing it on a website, involves making a copy. For example, if I photocopied a page from a book and put it on the wall in my room, nobody would complain. But if I scanned the same page and put it on my blog, I might be accused of copyright infringement. (Both of these are non-commercial uses -- I am not making any money from that page.) Copyright law today reaches much farther than it did in the past. Lessig summarizes this with a nice chart:

On top of all this, a handful of large media conglomerates control about 85% of all newspapers, TV, and radio in the US. This means two things: First, that if they sue you, they can spend a lot more money on lawyers than you can. Second, that they control what a large chunk of the population sees and hears, and if you have a dissenting or controversial opinion, good luck finding someone who is willing to broadcast it.

One consequence of the current over-reaching copyright law is that everyone who has ever downloaded an MP3 online (40 million American citizens, or about 13% of the population) are considered criminals. This is a result of the prohibition war fought by the content industry, ostensibly to curb the harm from piracy, but really to make sure their profits keep pouring in. ("Piracy", when defined as the use of someone's creative property without permission, is a lot more complicated than the media industry would like you to believe. Only some of it is harmful, and it is not clear that the overall impact is even negative. Lessig goes into this in depth in the first part of the book.) The content industry doesn't care about protecting artists. Their goal is to make sure that non-commercial creativity doesn't compete, so that all the content out there is theirs to control.

Lessig and his allies have tried a few things to restore sanity when it comes to copyright. First was the Eldred case in the Supreme Court, which was unfortunately lost. Then came proposals for an Eldred act, which were blocked by the media industry's lobby. Lessig seemed to conclude that any change has to come from below, with many people understanding and demanding a free culture. He thus helped launch the Creative Commons movement, which aims to provide a lawyer-free middle ground between the extremes of "no rights reserved" and "all rights reserved".

So if you don't want the rich and powerful few to control all of our culture, go read Lessig's book and familiarize yourself with his arguments. It is a rather depressing book to read, but then again, reality is often depressing. Pick a Creative Commons license that works for you, and use it for your own creations. Encourage others to reuse your work to fuel their own creativity. Start conversations about creative property and piracy that go beyond black-and-white thinking. And if you want to vote with your wallet, Creative Commons is an excellent non-profit to support.

PS. The entire book is available for free, under a Creative Commons license.