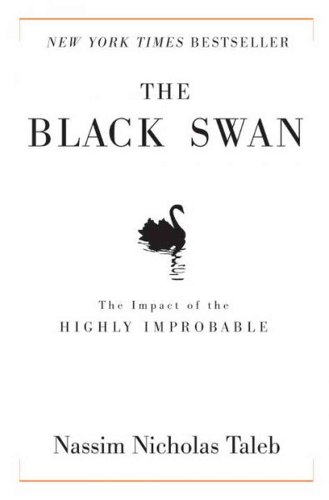 Taleb divides the world into three kinds of events:

In Taleb's colorful terminology, white swans live in Mediocristan, while gray and black swans live in Extremistan. His central thesis is that we almost always assume a variable is in Mediocristan, when in fact it's in Extremistan. Taleb is an options trader who made a lot of money in several stock-market crashes by betting on extremely unlikely events. As such, he has a lot of distaste for economists and financial forecasters, whose prediction track record is extremely poor, though no one notices this (more about this in a minute). Taleb accuses these forecasters of "Locke's madness": reasoning correctly from erroneous premises. He claims that their fancy models rest on white-swan, Gaussian variables, and are thus completely useless in a world dominated by gray- and black-swan events.

Why do gray and black swans rule the world? This has to do with the idea of scalability: If a book sells a thousand copies, then selling the one-thousand-first copy requires no extra effort from the writer. But if a baker sells one thousand cookies, the one-thousand-first cookie still requires work. So the writer's profession is scalable, whereas the baker's is not. Scalable phenomena exhibit winner-takes-all effects, thus giving rise to a power-law distribution. (There is one J. K. Rowling and she sells her books everywhere.) Non-scalable phenomena are necessarily local. (Every city has its own bakery.) Technologies such as the alphabet, the printing press, and sound recording enable scalability, and so they make our world less like Mediocristan and more like Extremistan. But our brains evolved in Mediocristan, and are ill-equipped to deal with scalable phenomena.

In what ways do we pretend that black swans don't exist? Here Taleb describes a constellation of fallacies and heuristics that make us less rational than we'd like to believe we are:

So what are Taleb's take-home lessons? Don't trust the forecasters. Train yourself to take important decisions rationally, not intuitively. Focus on the consequences of an event (which are knowable), and not on the probability of the event (which is unknowable except in Mediocristan.) Maximize your exposure to positive black swans (go to parties, seize anything that looks like an opportunity). Remain paranoid about negative black swans.

This book was a lot of fun to read. Taleb combines his insights with his life story, and plenty of personal philosophizing. His tone is at times rambling and arrogant. Here is a surprisingly bitter quote from chapter 14:

Is the world unfair? I have spent my entire life studying randomness, practicing randomness, hating randomness. The more that time passes, the worse things seem to me, the more scared I get, the more disgusted I am with Mother Nature. The more I think about my subject, the more I see evidence that the world we have in our minds is different from the one playing outside. Every morning the world appears to me more random than it did before, and humans seem to be even more fooled by it than they were the previous day. It is becoming unbearable. I find writing these lines painful; I find the world revolting.

If you could handle that, you can handle the whole book. Seriously, most of it is not nearly as bitter. Or you could grab his first book instead, which I haven't read. Some reviewers on Amazon think it's less rambling.